Before Versailles: Before the History You Know…a Novel of Louis XIV 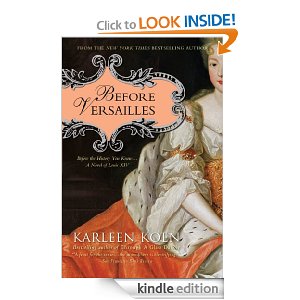 Karleen Koen writes the life of Louis XIV during a three month period in 1661.  At 22 years of age, he has the opportunity to change the face of the court and its workings by taking charge of departments upon the death of  Cardinal Marzarin.  Although he is replaced by an equally powerful man, Viscount Nicholas, ultimately King Louis removes him from office.

The intrigues of court would not be complete without the intrigues of the women that made the court their life.  Intrigue, rivalries, jealousies, and outright power struggles between the women were normal and the writing helped to define the role of women in society at the highest level.  The dress, help, social mores and values help to clearly define the progress for women from slave and bedmate to business owners and elected officials.

I found the social aspects of the period colorful, dangerous, and full of intrigue.  Written from a woman’s perspective, it may not have the swashbuckler of other authors about the King, it has immense value in defining “the game of court”, the concept of marriage, and the true test of the period – loyalty.