The Crimson Petal & The White – Review

An historical novel of England and its many houses of ill repute. One Lady of the Night, Miss Sugar, has her special story told when she’s discovered by a wealthy industrialist.

There were three issues I had with the book that made it a difficult read for me. First, the author spent 1/3 of the book in lurid sexual scenes and encounters that really, in my opinion, added little to the overall quality of a great story. 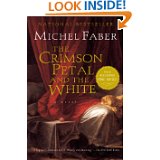 efactor and his wife around in public places and is never noticed? I found that difficult to believe and that made it hard to believe in the other characters.

Third, the author missed an opportunity to introduce Miss Sugar and her mother at the beginning of the story to give the ending more significance.

The ending has been discussed by some of our book club members, and other reviewers as awful. I didn’t mind it. The author really had no place to go except there and he did leave an opening for Book 2. But Book 2 would have to be better organized for me to purchase it.

This long, wordy novel would be a fine check-out for Prime Club Members, but not for your hard-earned dollars, thus I rated it 3 Stars.