The Flower Sellers – A Tale of Two Sisters

Today is the first day of the rest of your life.

That phrase never appeared in my latest read – “A Memory of Violets: A Novel of London’s Flower Sellers” by Hazel Gaynor. The children of historic London were the flower sellers – watercress, roses, lavendar, shamrocks, each season there was one special nosegay 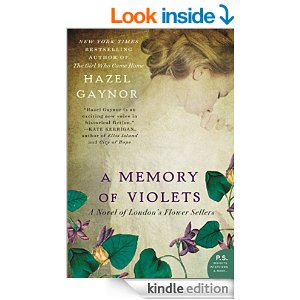 they sold on the street to the affluent Britains. It was there they learned to take each day as it comes, don’t wrorry about the future, leave the past where it is. It was there that “little mothers” were born. They were the children who raised their younger siblings in the absence of any parents. It was there the street Urchins might meet Mr. Shaw and be chosen to live and work at his Watercress and Flower Girls Facility in Clerkenwell.

The street urchins of London in the 1800’s, results of polio, accients and abandonment, were like most of the street children – they wore tattered,m dirty frocks, which hun off their undernourished bodies and went about barefoot. Mr. Shaw “sensed that it would be only y housing the girls, removing them permanently from theirlife on the streets and providing them a purpose, that we could ever make a real and lasting difference to their lives.”

The houses were called a “Crippleage”, but they were places where children learned that “to love and be loved is the greatest joy on earth”. They learned to make silk flowers by the hundreds, and they learned to care and share.

This is my best read of 2015, at least thus far. Ms. Gaynor has done a wonderful job telling their true story, all the while asking “Is this an ending or a beginning?” Good question – one I should have asked myself over the years. The love of two sisters, the sorrow of childhood poverty, the history of women in society, the compassion of a London man who owned an engraving business who had #enough and hired a room for hot cocoa and bread and butter.